Today I figured we’d do something a little different on the blog. Recently on Instagram I shared a super old pic of me on the first trip I ever made into Salem. So, why not chat about it?

I first visited Salem about ten years ago with my then boyfriend, Corey. We had been dating for about six months or so and he wanted to go for Halloween. At first, I wasn’t so sure. In my head I was picturing crowds and long lines for everything…the idea was a little overwhelming to me. My first reaction (being totally honest) was a no. It was the prospect of going over Halloween that made me hesitate. I knew it would be gangbusters then and would have been open to the idea of going at another point in the year, but he convinced me.

We looked for places in Salem, but the town was pretty booked up, naturally, so we wound up browsing bed and breakfast spots in Rockport, MA. Corey stumbled across The Tuck Inn and they miraculously had rooms open!! The room we stayed in was their “efficiency room” meaning it was basically just the bed, a bathroom and dresser but it was perfect. Not like we were going to be in the room much, anyways. This efficiency option has since been converted to a larger apartment style option, or so I have heard. 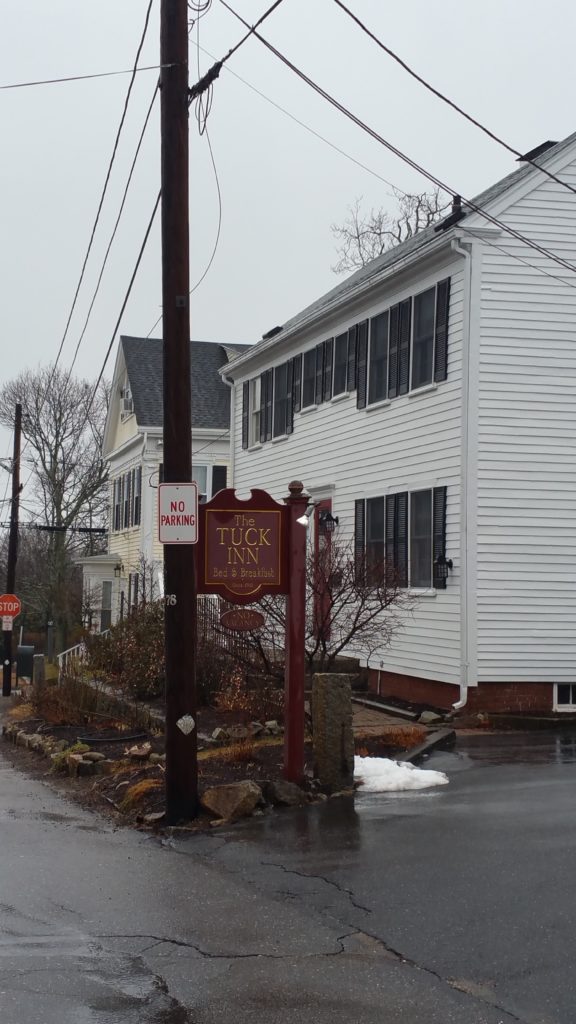 Anyways, we booked a night at The Tuck Inn and headed up. We wanted to get into MA as early as possible, so we did something a little ridiculous. We slept in the car. We got into Rockport and literally slept in the car. I think we were probably the earliest check in at The Tuck Inn ever, and I am grateful they even let us do so. We threw our stuff into the room and headed to the train station in Rockport. Upon getting to the train station we realized we didn’t even consider the fact that we should have brought Halloween costumes. So we ran into the shop that was attached to the station to grab some odds and ends. I grabbed a purple witch hat (seen in the picture below) and he got a black beanie hat and a cat mask. Get it? A cat burglar? 😛 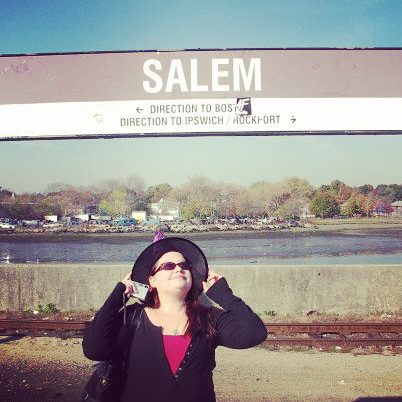 Once the train got into Salem about half an hour later, the excitement started to really sink in. We sat down at Fountain Place for breakfast and seeing the large, inflatable pumpkin on top of the awning of Rockafellas was so neat. I honestly could not stop smiling.

The crowds were definitely there, but it wasn’t as anxiety-inducing as I had imagined. The vibe of the whole town and the energy of the crowds in general was amazing and very upbeat. Everyone was just simply in a good mood and happy to be walking around, ducking into shops and looking at everyone’s costumes. There were costumes ranging from simple all the way to professional cosplayer level…it was amazing.

We spent that day and the following one wandering around and checking out as much as we could. I had such a fun time, I can remember borderline crying as we left the city on November 1st to head back to Connecticut. I realized at that point how much I had really found my place, my “spot”.

What was your first trip into Salem like? How did you navigate any hiccups along the way? What were your favorite parts? Feel free to share below.

Previous Post: « 5 Things you should pack when going to Salem, MA
Next Post: Easter 2018 events in Salem, MA »

Hey everyone, happy Monday!! Today on the blog I h