It has been a few since I’ve done a spotlight and I’m happy to be sharing with you the Schooner Fame today on the blog. I went out last weekend on the water with the Fame and crew and had such a fun time. It was super relaxing on a nice chilly day, I learned some local history from Michael (one of the owners) and we even shot the cannon! Don’t worry, it wasn’t loaded with an actual cannon ball. 😛

So, here we go…a little bit about the Fame. The questions have been modified slightly from what I usually do to accommodate the fact that they aren’t a “brick and mortar” location like I have featured in the past. 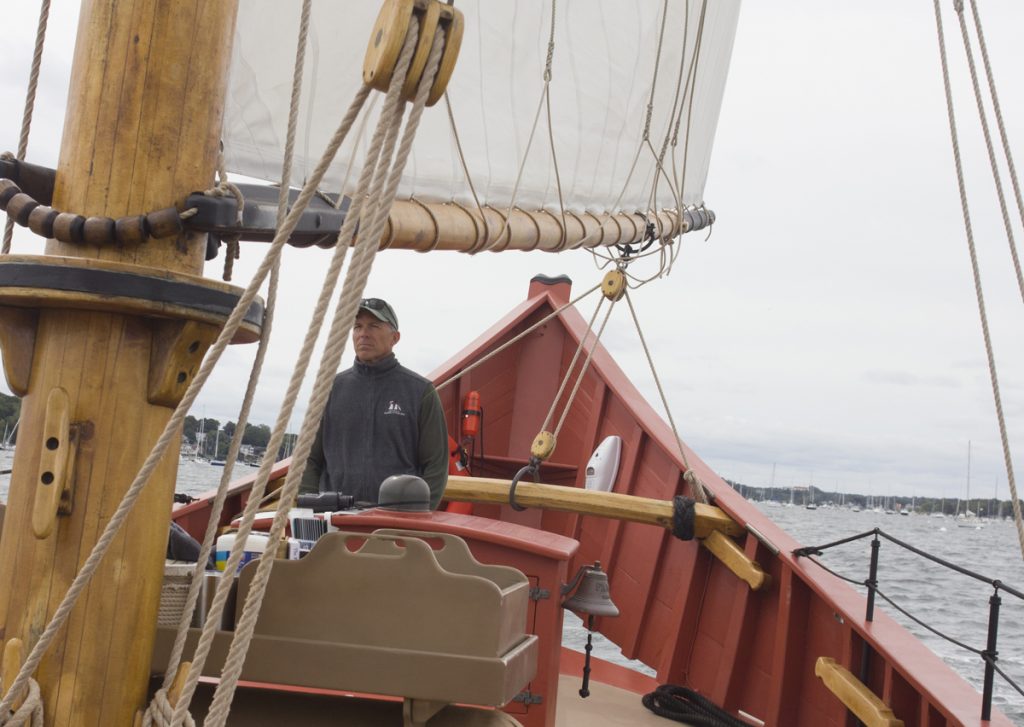 Tell me a little bit about yourself and your business

“Michael and I were high school sweethearts. We have always enjoyed sailing —Michael at camps when he was young, and myself on Lake Winnipesaukee in my dad’s homemade skiff. For our honeymoon, we took two weeks of sailing lessons in California and earned our bareboat licenses. Over the years, we rented sailboats on Lake Champlain and in the Caribbean, and had some great vacations. When our children were small, we got our first sailboat, which we docked in Beverly. We had many adventures and over-nights!

Michael has always been self-employed. He started a magazine about 30 years ago, called Boston Baseball. It the best-selling publication on the Boston Red Sox and is sold by subscription and outside of Fenway Park on game days. He has always worked at home, and our first home was in Essex, MA.

Essex is the home of the Essex Shipbuilding Museum, and Harold Burnham, an eleventh generation ship-builder. We got to see him launch his first schooner, the Thomas E. Lannon. Eventually Michael became interested in the idea of building a boat as a business venture. First, he explored building a replica of the Hannah, which is a big piece of Beverly’s history. But for a variety of reasons he began to think that Salem would be a much better home for the kind of business he had in mind. Michael and Harold began to explore boats with historical ties to Salem and Harold discovered that there was a locally-built schooner named FAME with an interesting history!

The original FAME was built in Annisquam (right next to Essex!) in 1811. It was a Chebacco boat, built for fishing. But the entry of the young United States into what we Americans call “The War of 1812” was a big blow to Salem, which had profited from two decades of warfare in Europe to expand its trade routes all over the world. The war was going to put a lot of Salem mariners out of work, so 25 of them banded together, bought FAME, and outfitted her as privateer.

When the war broke out in June, they obtained a privateering license and set sail for British Canada, where FAME captured the first two prizes of the war. American privateers would go on to capture over a thousand British vessels, so privateering was a big part of the war effort and put food on a lot of tables here in Essex County, just as it had during the Revolution.” 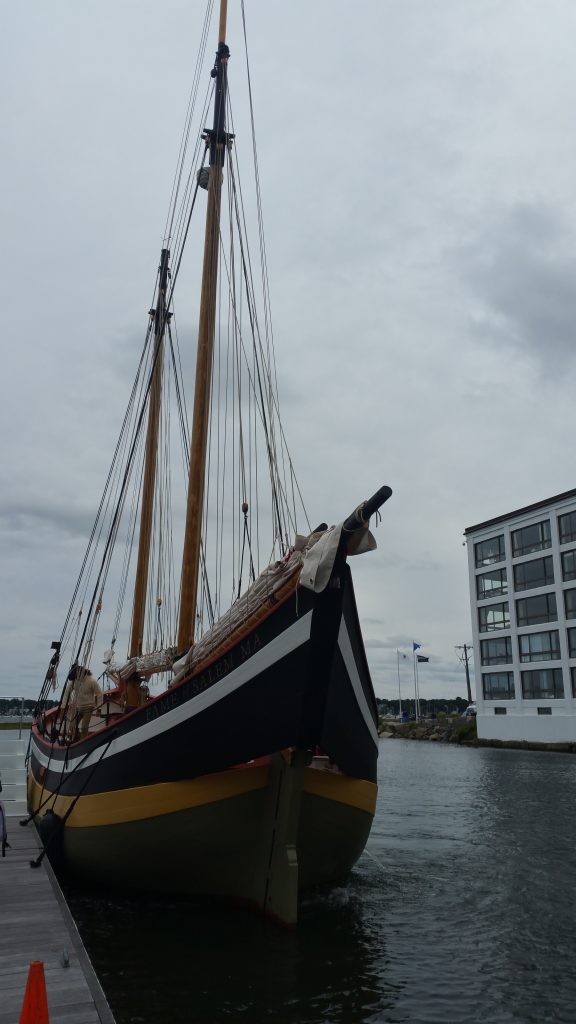 What made you chose Salem for the location of your business?

“Our schooner is the FAME “OF SALEM” — she was built to be here! Salem is best known for the witch hysteria of 1692, but it was maritime trade that put Salem on the map, and made it one of the richest and most important towns in Colonial and Revolutionary America.

Michael has always been a history buff, and loves maritime history. He has written two books about Fame, one on the construction of our replica and the history of the original FAME, and another on the socioeconomic impact of privateering in Salem.

We have partnered with the Salem Maritime National Historic Site many times over the years for lectures and educational opportunities. We take all the Salem fifth graders sailing, in partnership with the Park Service and Essex Heritage.” 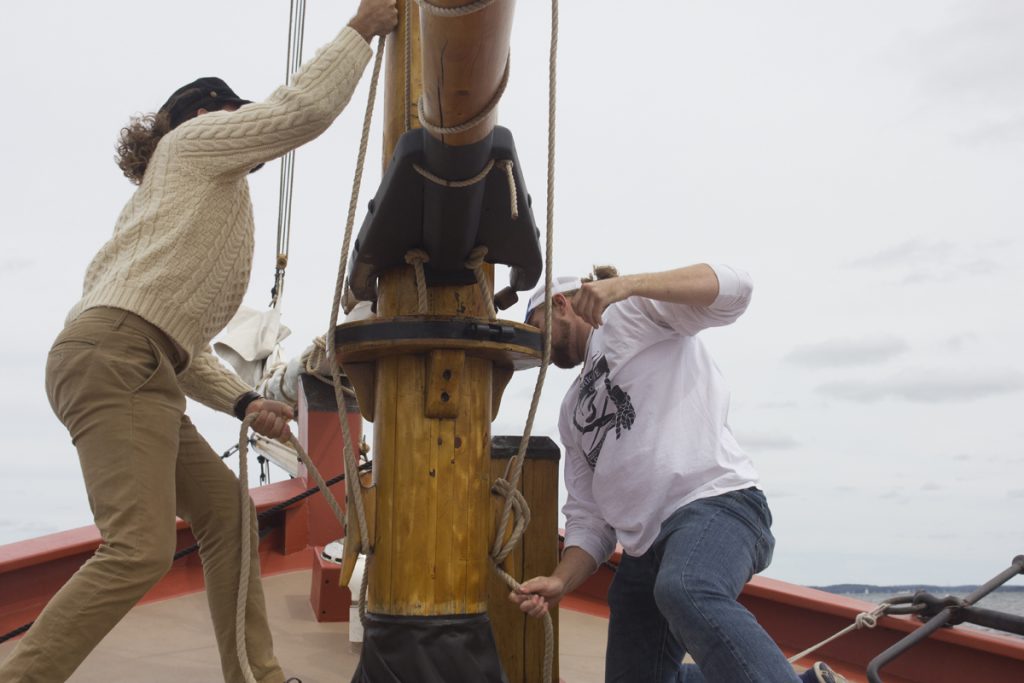 What has the biggest challenge been for you as a business owner in the witch city? What advice would you give to someone considering opening a business in Salem?

“There is the challenge of customers finding parking! Sometimes the traffic in and out of Salem can be tough as well. For us, there is also the challenge of getting people down to the waterfront! Many tourists spend their time along Essex Street and around the Witch Museum and don’t venture towards the water.” 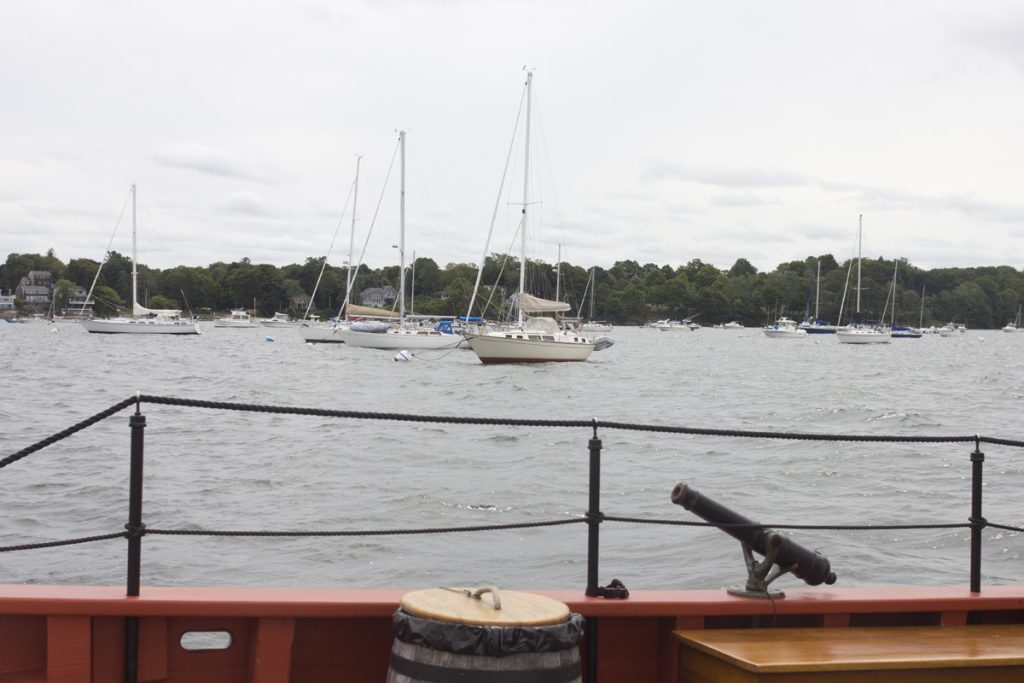 What’s one thing you’d want people to know about your business that may not be inherently obvious?

“We love kids! It’s a pleasure to introduce sailing and history to children. Because the sail is interactive—they can help raise the sails or try steering the boat—they rarely get bored! Also, we do fire a cannon, and most people think that’s quite interesting!” 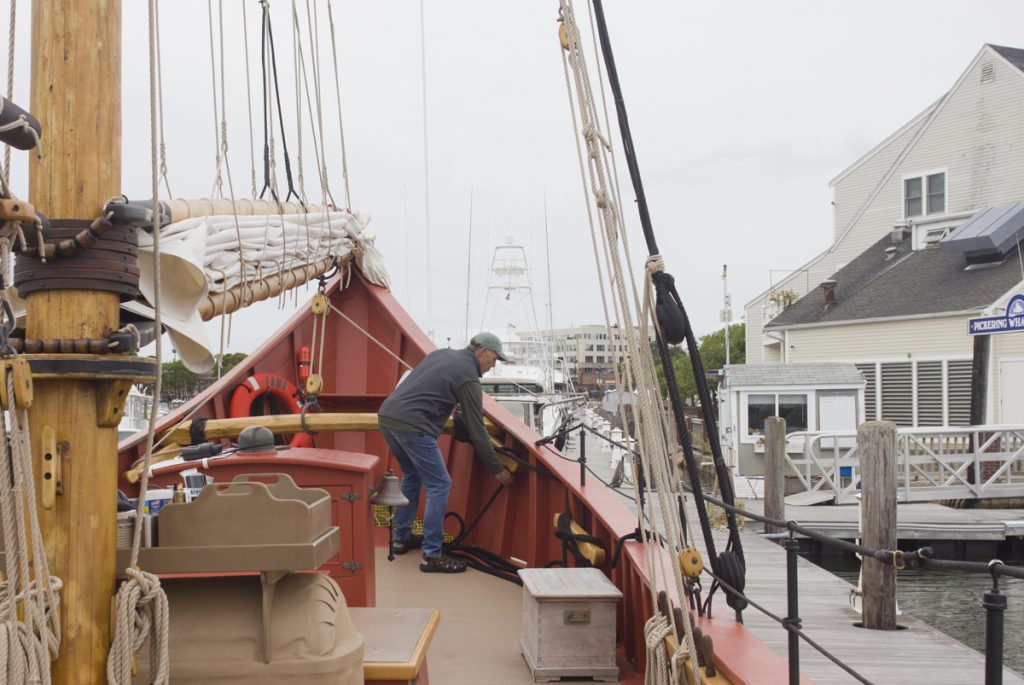 Is running a business in Salem in October as chaotic as it sounds?

“We are lucky to LIVE in Salem, so we can walk to work! It’s fun to see the costume craziness heat up as each October day passes! And the fall is a beautiful time to sail—the foliage is gorgeous!

What’s hard is the traffic, and parking for our customers. We have timed departures, of course, and in October people are constantly running late due to traffic and parking. Again, people get “stuck” in the downtown area, and sometimes don’t even know there is a beautiful (and more peaceful) waterfront that they can explore.

Honestly, many of the visitors who flock to Salem in October are not interested in maritime history. We do meet some great people each fall! But we also see a lot of young people, often in costume, walking around the downtown with nip bottles — the Curse of Salem —and sometimes we have to wonder if this is really the kind of tourism we want to encourage. Obviously we can’t speak for other Salem merchants but we would be willing to have fewer October visitors if the ones who did come wanted to spend the night, eat a meal, and really explore the town, rather than treat it like a night at the carnival.” 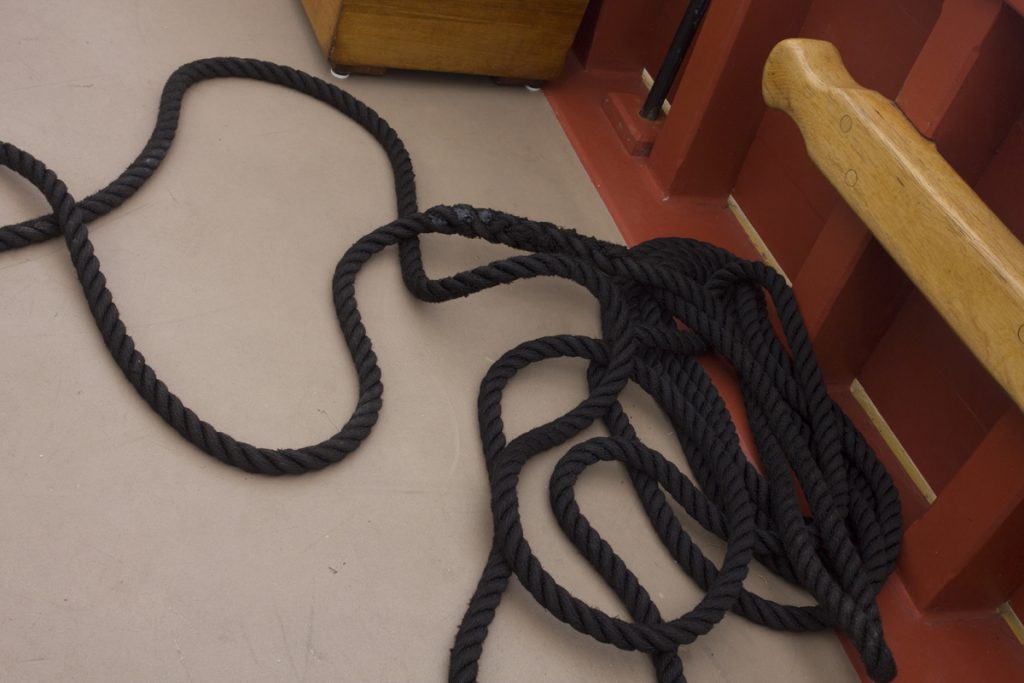 Do you have any future or upcoming events you’re excited about or want to share?

“We are planning to add another sailing vessel to our fleet in 2019! It would be a smaller boat, so that couples and families can go out with a professional captain and enjoy a more private sailing experience.” 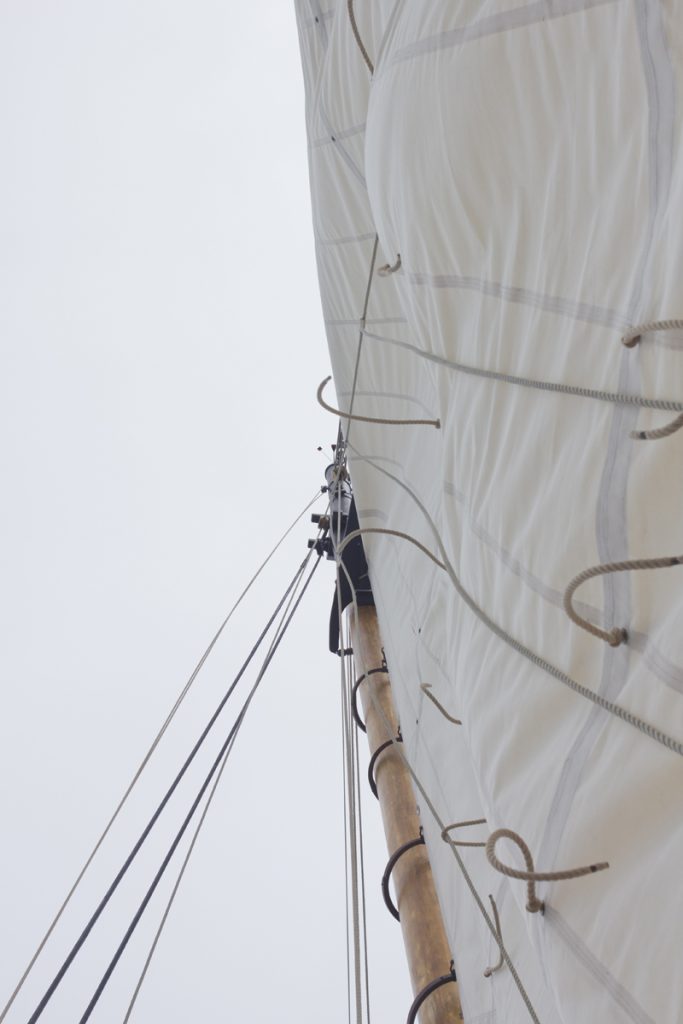 Do you have a product or service that is your specialty? Is there something specific you are known for?

“Nobody else does quite what we do — taking folks sailing on an authentic schooner which represents an important piece of Salem history. Everyone who sails with us learns something, everyone has the chance to help raise the sails or take the tiller, and our reviews speak for themselves. FAME is not only the top-rated boat in Salem, it’s the top-rated outdoor activity in the entire town, according to TripAdvisor.

That said, we are always looking to improve the experience for our customers. This year, we partnered with Salem’s Deacon Giles Distillery. Dark & Stormys are popular sailing beverages, and Deacon Giles has a twist: the Deacon Stormy: ginger beer, Deacon Spiced Rum, and a lime twist! VERY popular this summer.

We also work hard to keep the experience affordable for visitors and locals. We charge significantly less than similar tours in Boston and Gloucester and we have discounted rates for seniors, for military, and for children.” 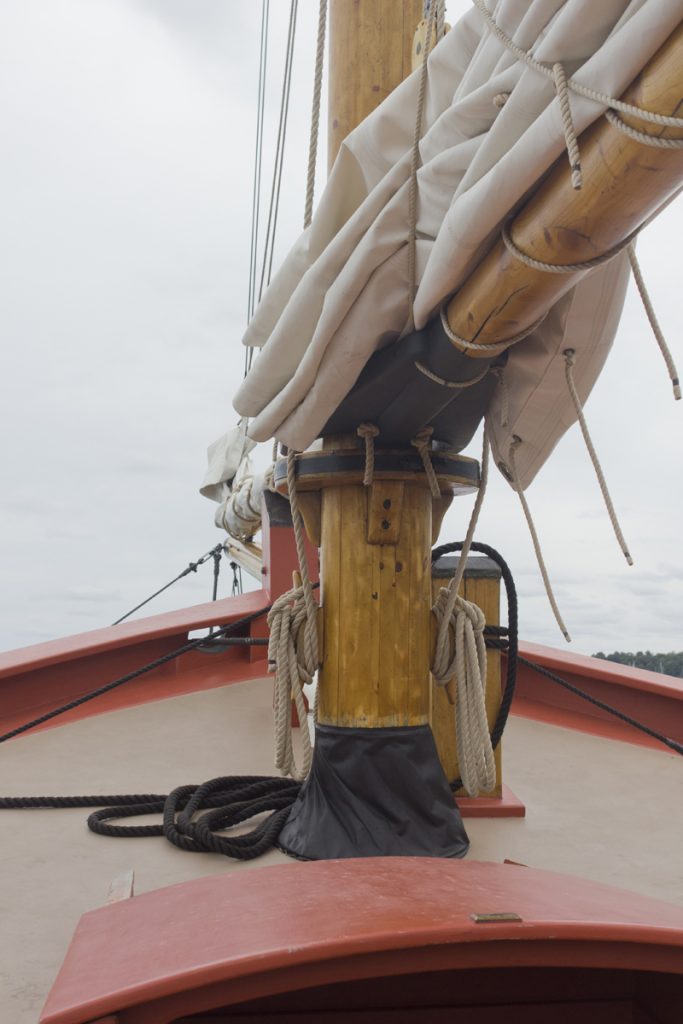 Do you do anything specific or special during certain times of the year? October or non.

“Every year on July 4th we have a fireworks cruise! Our dock at Pickering Wharf is right smack in front of the fireworks display, and so after sunset we return just in time for the show. The music and the crowd are right there, but things are less hectic on the dock. We have cold beer and a clean bathroom and a front-row seat for the show, and people come back and sail with us every year on the 4th.

Several times a season, we host local musician Larry Young, who is well known in Salem from his Friday evenings at O’Neill’s on Washington Street. He comes aboard in his Colonial persona of “Tobias Tripp” to present Rum & Revolution, with songs, music and grog!

We also make an annual trip to the Gloucester Schooner Festival on the Sunday of Labor Day weekend to participate in the Parade of Sail. It’s a half-day trip leaving from and returning to Salem and it is absolutely the highlight of our season!”

If you’re in Salem and looking to spend some time out on the water, I highly suggest checking out the Fame. Michael and Melissa are super nice and very genuine people, I had a great time out on the water with them. Their website is www.schoonerfame.com and they can also be found on Facebook and Instagram. Enjoy!! <3