During the fall I get many messages and emails that sound something like this: “I wanted to stay in Salem for October but I just looked around and all of the hotels are full. Where can I stay?! Help!!”

This got me thinking that a little post series where I present some other options along the North Shore could be helpful in those situations. The North Shore of Massachusetts has so many cute little towns, historic inns, waterfront views and more that are all within a reasonable driving distance to Salem or along the train route. I reached out to a few places and the first one I have worked with so far is The Emerson Inn located in Rockport. Salem is my favorite place on the planet and Rockport is close second, so I was happy to have an excuse to hang out there.

A little history of the property…

“William Norwood, a resident of Rockport, owned a very popular tavern in Pigeon Cove located near the present Post Office, prior to opening the Rockport Inn that eventually became Emerson Inn. In 1856, however, his thriving business came to an abrupt halt when Hannah Jumper and 200 townswomen launched a raid destroying all of the alcoholic spirits in Rockport.

So, now out of the tavern business, Mr. Norwood turned to the summer vacation trade just beginning to discover Rockport. He and Mrs. Norwood began operating “The Pigeon Cove House”, an inn “in a pleasant situation” when Granite Street was a dry and dusty road. It was well suited for the carriage trade of the day.

The untouched, natural beauty of Pigeon Cove drew visitors from as far away as New York to the New England inn, and was a popular summer resort for clergy, essayists, and poets. Mr. Norwood enlarged the house to become “the building of many gables,” as the number of summer guests increasingly included families. After Mr. Norwood’s death, Mrs. Norwood not only ran the inn on her own, but to wide acclaim; “winning respect and commendation… from all quarters of the land…”

In the 1850’s Pigeon Cove became a popular destination for Notables of the day. It is said that Henry David Thoreau brought Ralph Waldo Emerson to Cape Ann for a hike along the Atlantic Coast. They stopped for morning tea in Folly Cove and afternoon tea in Pigeon Cove. Emerson fell in love with Pigeon Cove and for the next few summers he brought his family, “nest and nettle”, to vacation there. Emerson found inspiration in the rocky coast, which is evident in his poetry.

During the Christmas season of 1866, Mrs. Norwood sold the historic Massachusetts inn to Mrs. Robinson for $9,000 (roughly $250,000 today). In 1871, Mrs. Robinson moved the building to the corner of Philips Avenue and Green Street, its present site. The building was used as a rooming house, run by the McGuire family until 1911. Then, after a year and a half of extensive renovations, the inn was reopened as the Hotel Edward, a “luxurious, modern hotel” that promised private dining rooms for “automobile parties”, a chauffeur hall, and a fireproof garage for 30 cars. The building adjacent to the pool served as the carriage house and garage during this period.

The Edward continued to be a grand hotel attracting guests worldwide. Fashionable and modern with high accolades for ‘sterling’ service, the Inn boasted the first telephones in the ‘cove,’ although not very useful since no one else within calling distance owned one! The first telegraph, the first gas, then electric lights – The Edward always stayed a step ahead – or at least that’s the story.

The tourist industry was still booming in 1930 and renovations were made to add additional rooms. In 1964 the Wemyss family bought the Inn and reopened it in 1965 as the Ralph Waldo Emerson Inn, renaming it after the Inn’s most celebrated guest. Great collectors of antiques, Mr. & Mrs. Wemyss added to the many original pieces, as well as collecting paintings of local artists of their day.

On August 17, 1998 the Inn began a new chapter in its history when Mr. and Mrs. Coates purchased the Inn from the Wemyss. Mr. and Mrs. Coates’ first daughter was born just before they passed the papers on the sale. A favorable omen indeed! It is evident the Coates fell in love with this beautiful old building and the breathtaking spot it occupies, perched beside the Atlantic Ocean. The vision of the future is in the restoration and preservation of the long ago splendor with the unique Pigeon Cove charm and absolute dedication to award-winning service, known to all ‘quarters of the land.’ In July 2005, Emerson Inn by the Sea was offered Rockport’s first liquor license since 1933, allowing the inn to be the first in town in decades to serve a full menu of wine, beers and popular spirits.

Emerson Inn was purchased by the Migis Hotel Group in 2015, again renovating the Inn to further hone it’s historic charm and local character. The on-site restaurant, formerly known as the Grand Cafe, was rebranded and reopened as the Pigeon Cove Tavern, an ode to the legacy of the Norwood Family and the original Pigeon Cove House.” [Source: The Emerson Inn]

So what did I think of my stay?

I think the Emerson Inn was absolutely charming and I would stay there again, no hesitation.

The bed was large and fluffy with a great mattress and I was very comfortable in my room. If you’re picky about your pillows and like them to be a little more on the firm side, I’d suggest bringing your own because these ones were very soft. I didn’t have an issue at all, but just a heads up for those who are particular about that. The room had an awesome air conditioning unit so I was nice and cool during a blazing hot week in MA. 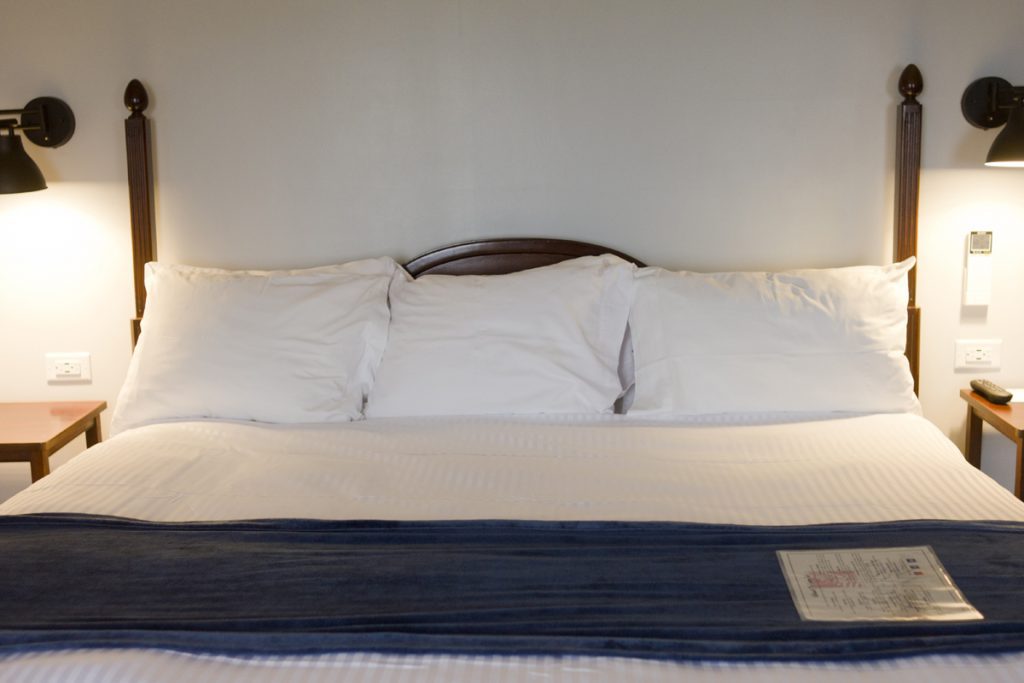 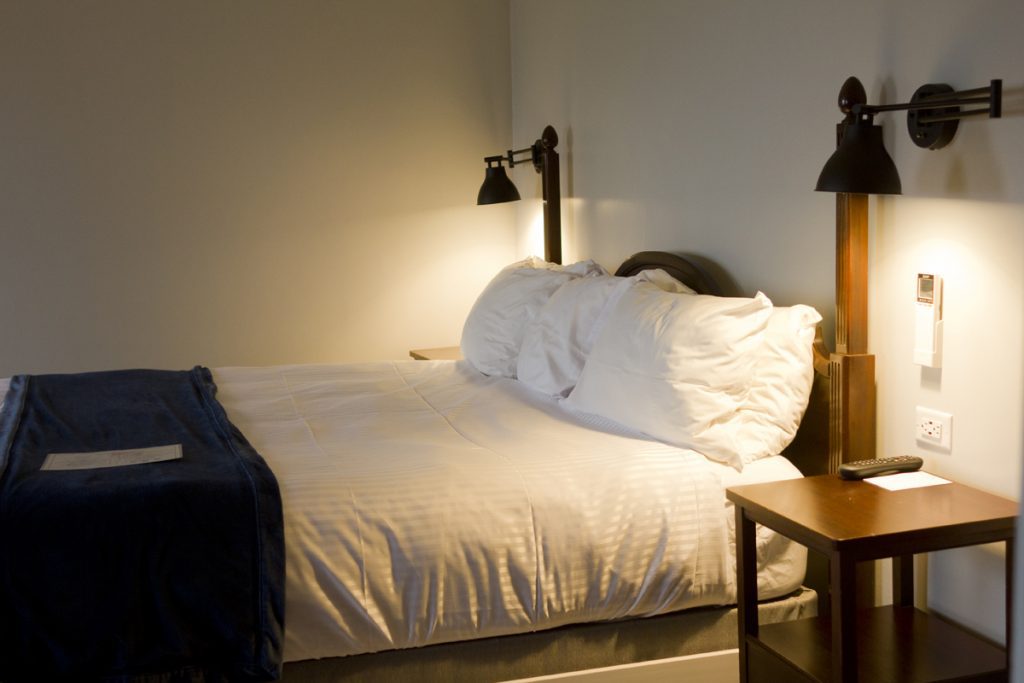 The room had a private bathroom with a nice big shower and tub as well as a small desk to work at. There were two chairs for relaxing and two windows that faced the ocean which was lovely to wake up to. 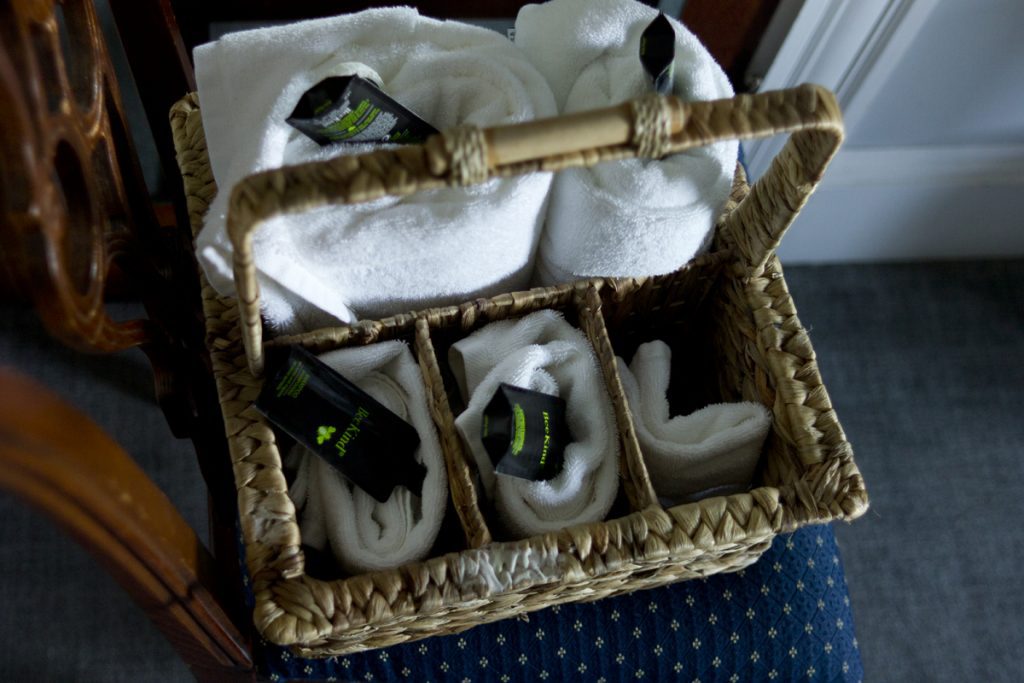 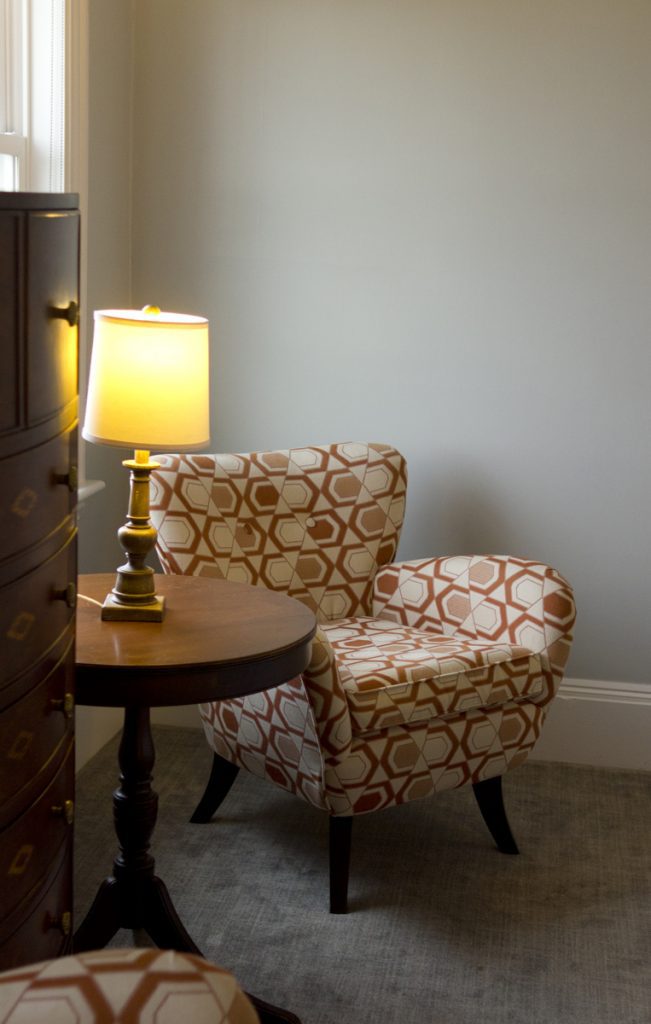 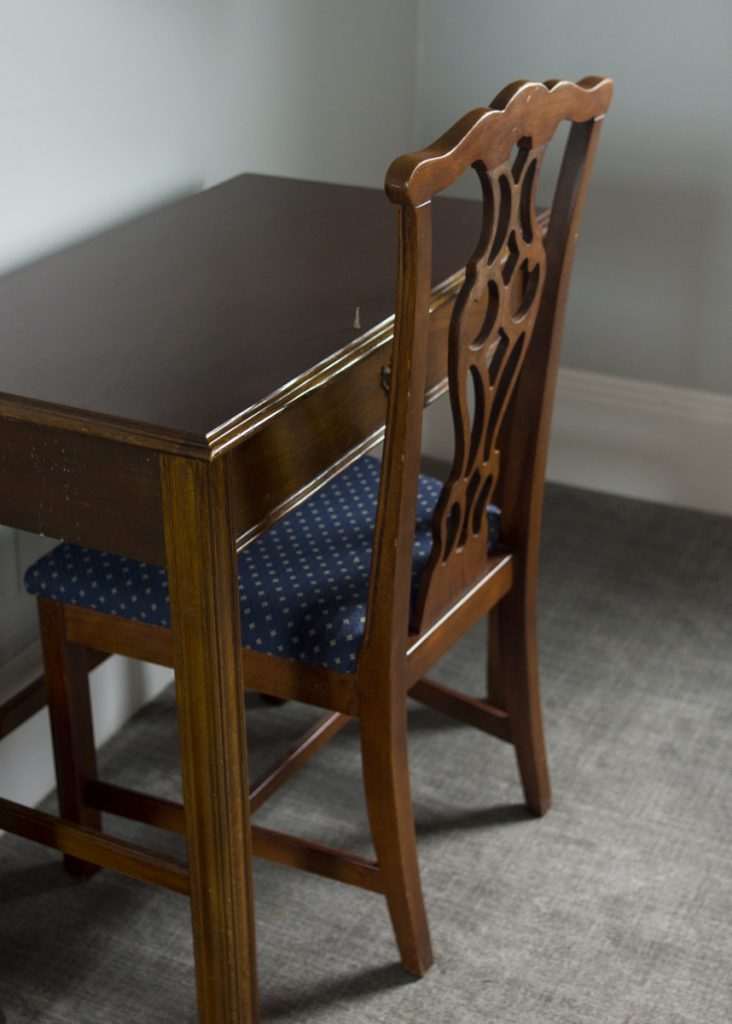 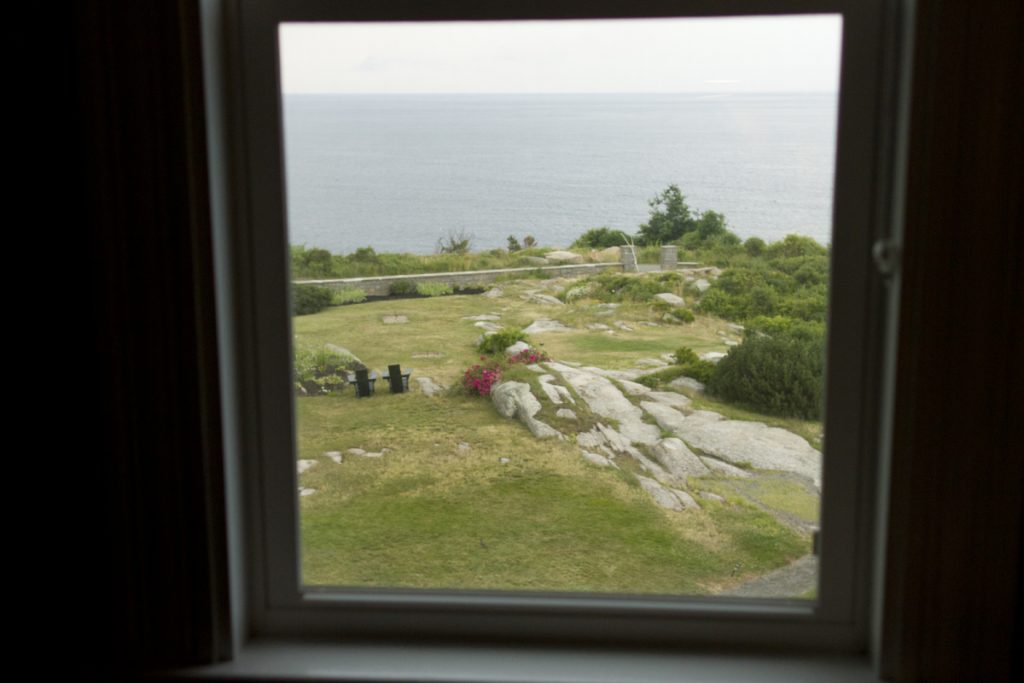 After checking in I grabbed my camera and wandered the grounds a little bit, snapping some photos. 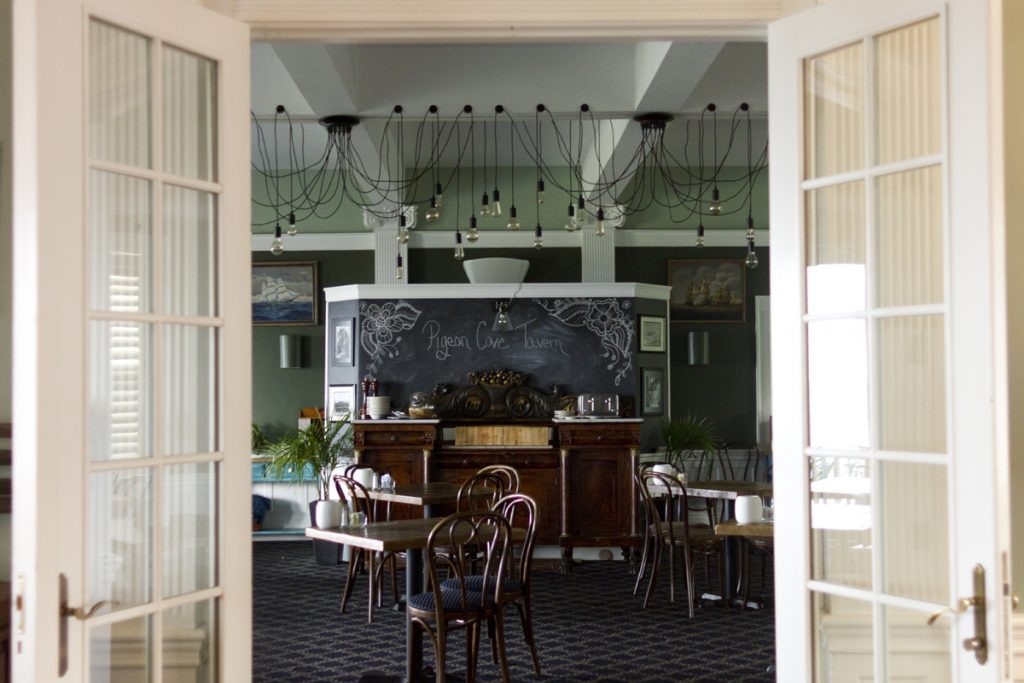 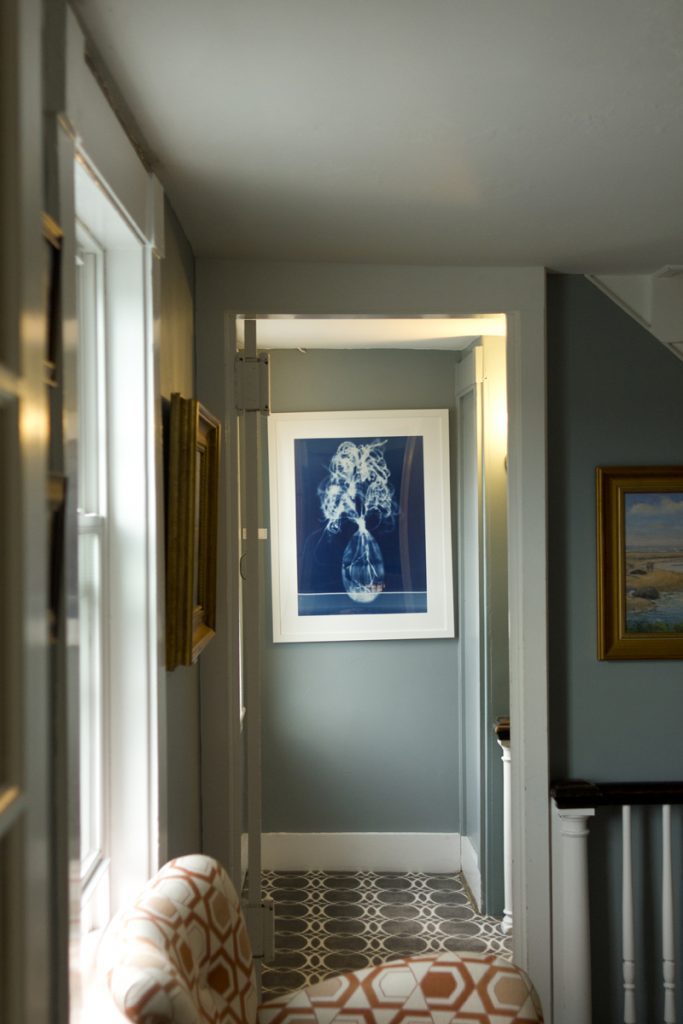 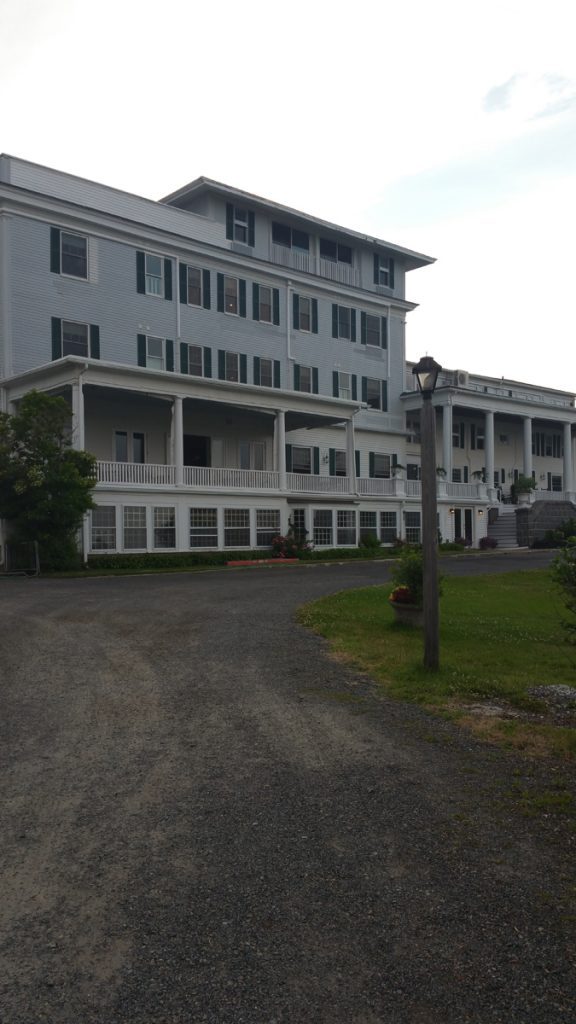 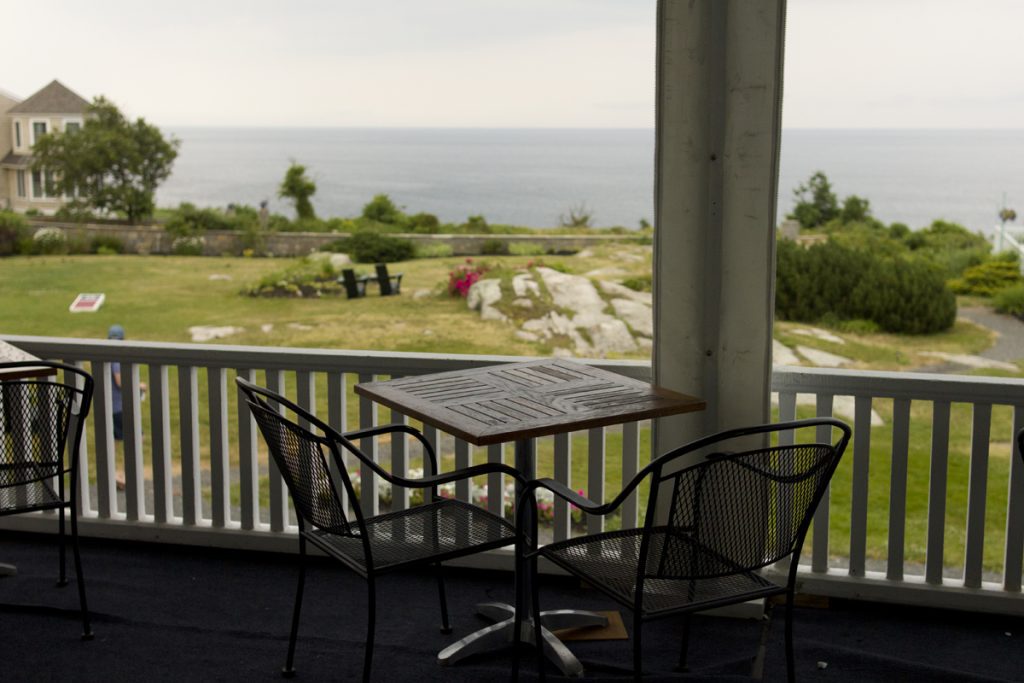 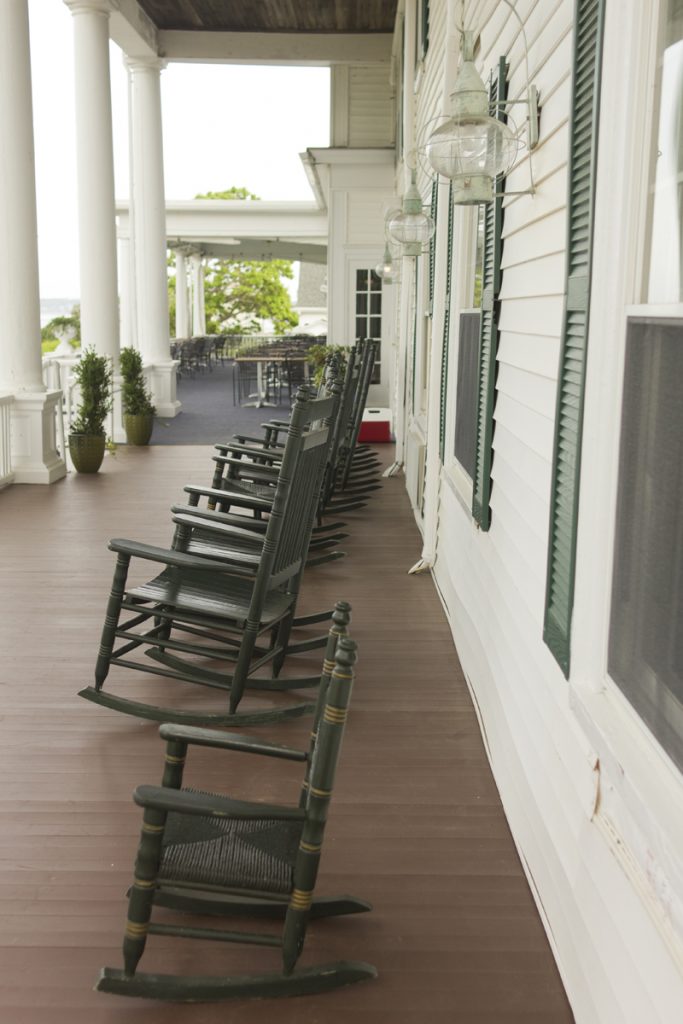 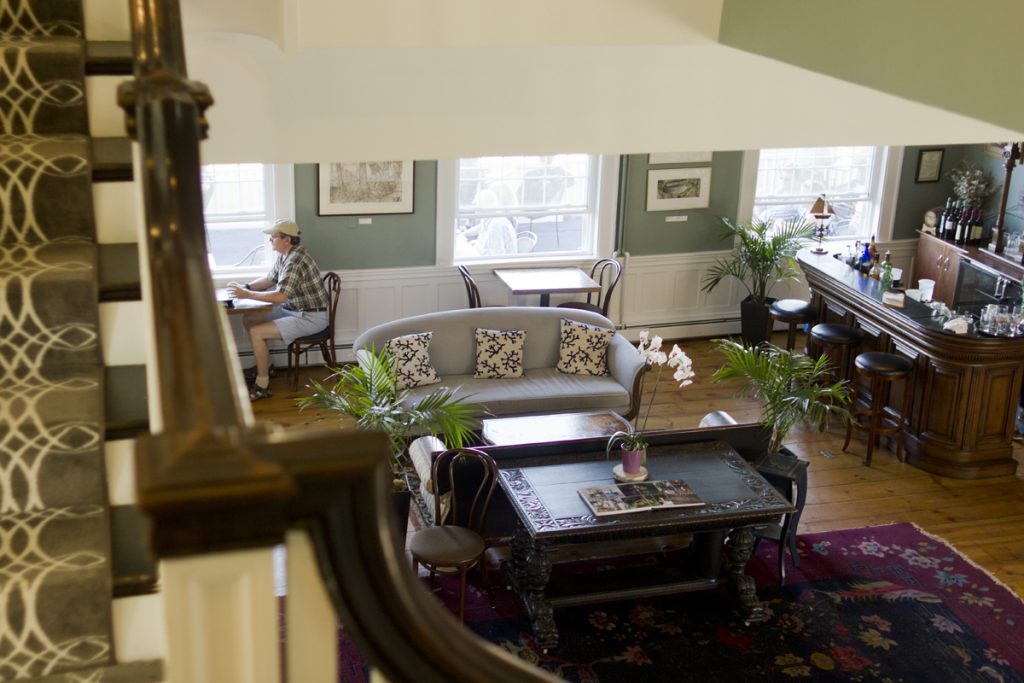 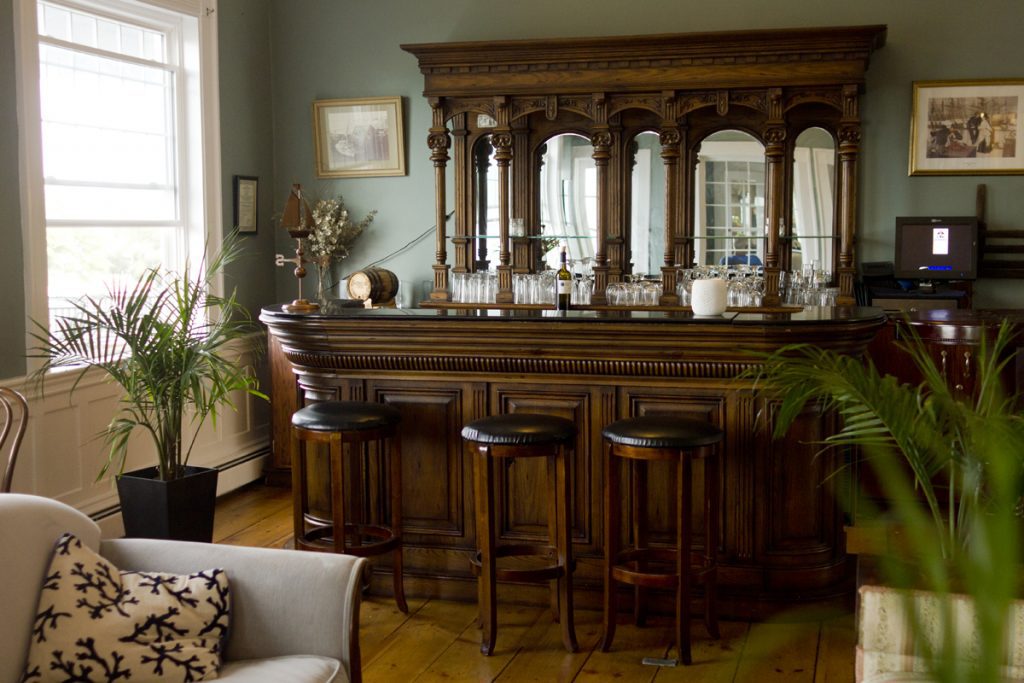 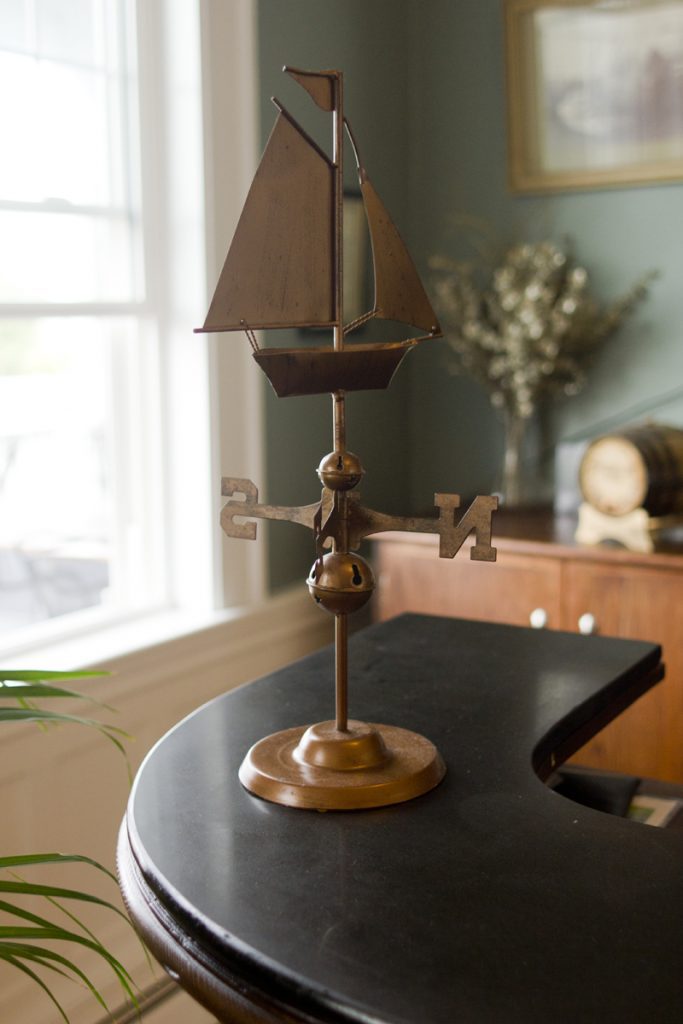 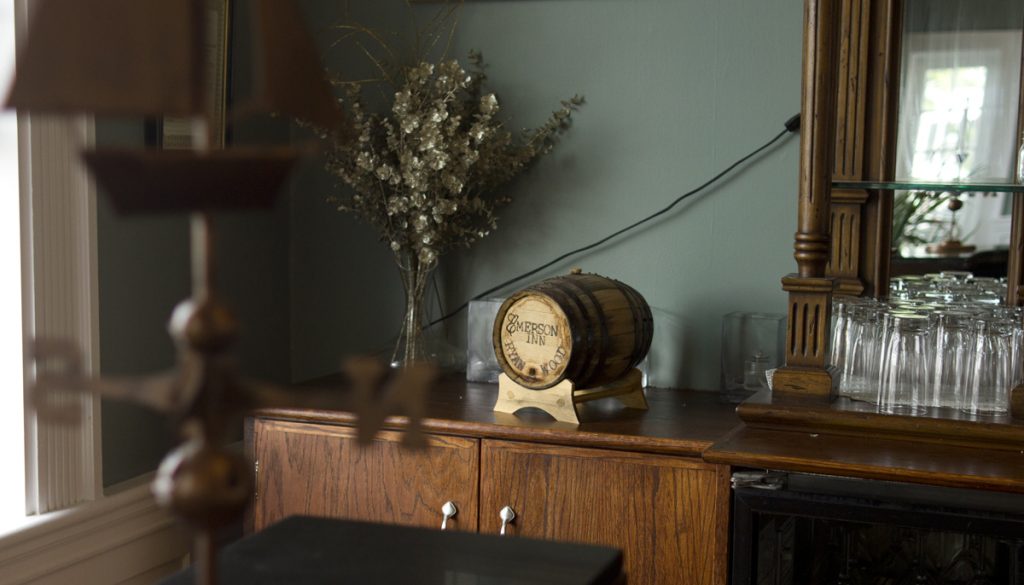 I spent two nights at the Emerson and went back and forth from Rockport to Salem several times. The ride is about 30 minutes by car, which isn’t bad if you ask me. If you didn’t want to use your car, the train is also an option. The station is a five minute ride from the Inn and offers parking.

On the night of July 4th I had dinner at Pigeon Cove which is the tavern located inside the Emerson Inn. I had spinach risotto which was absolutely delicious, oh my goodness. The spinach was blended into the dish so it came out a really neat green color! Regardless of if you sat on the porch or inside the Tavern, you had a nice view of the water which was great. 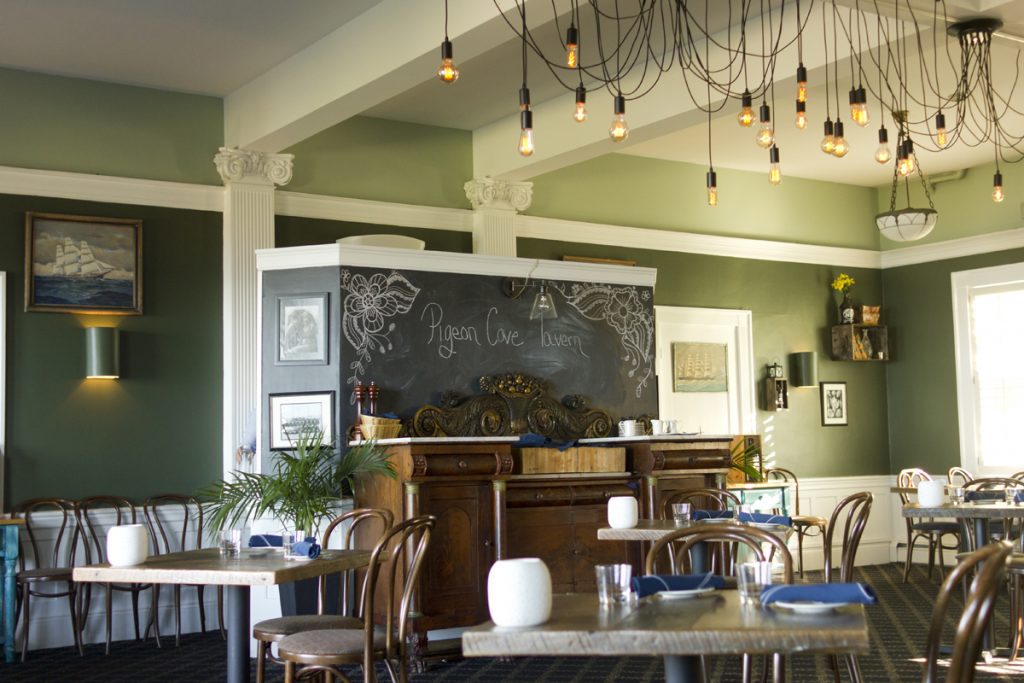 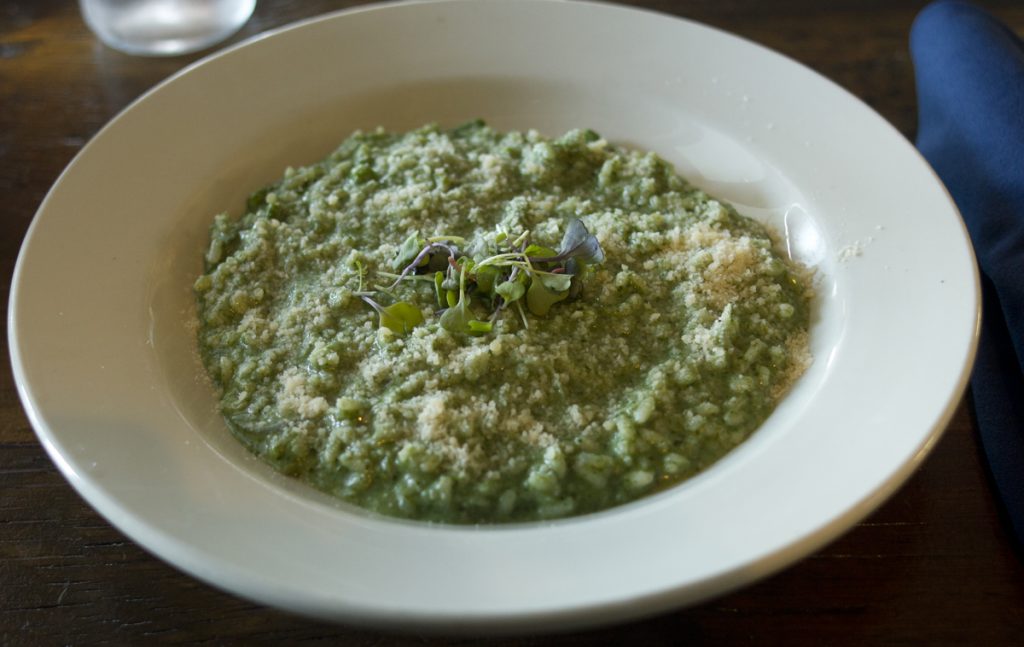 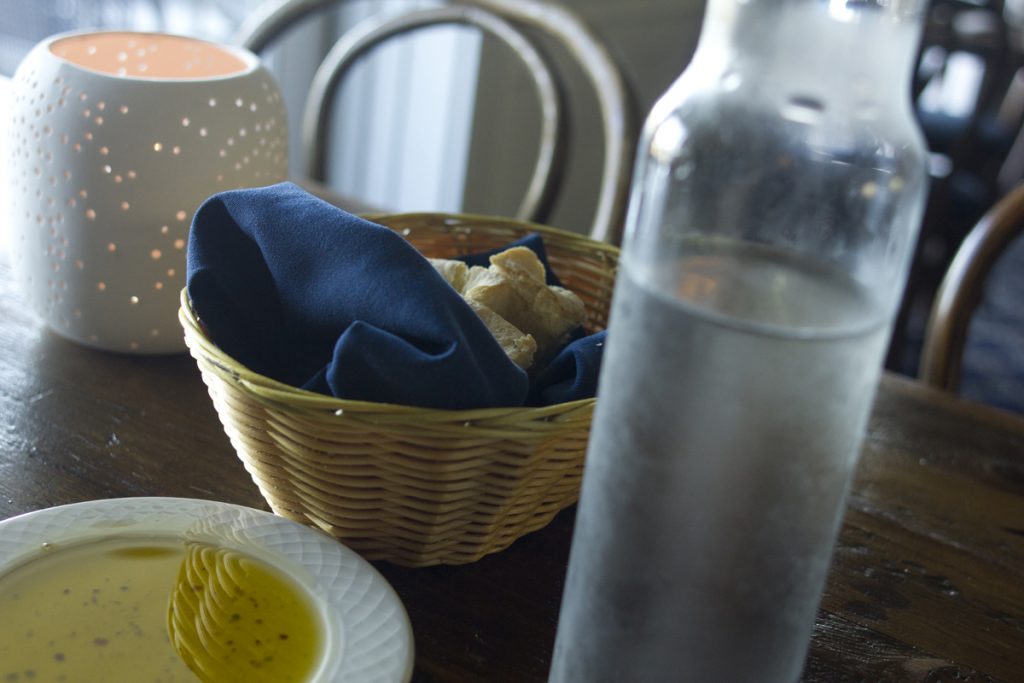 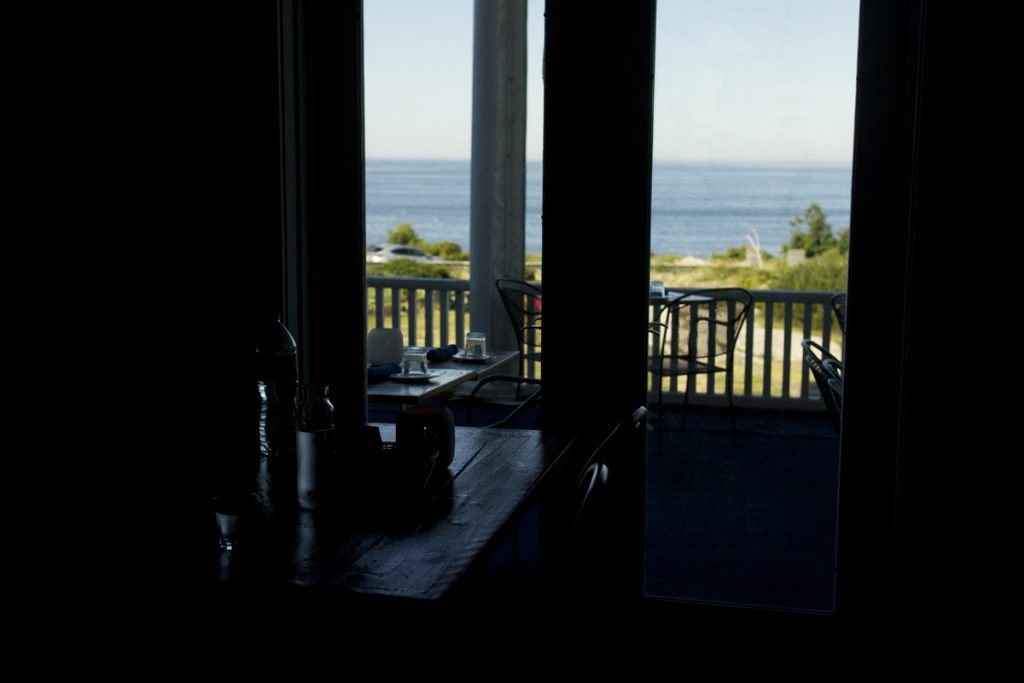 I also did some wandering…

A few images I took while wandering the shops… 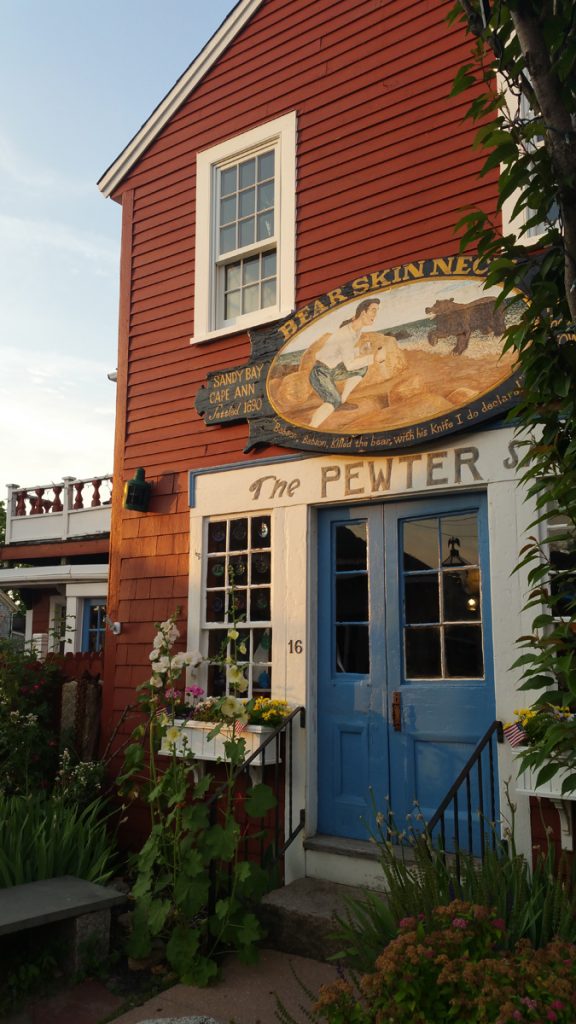 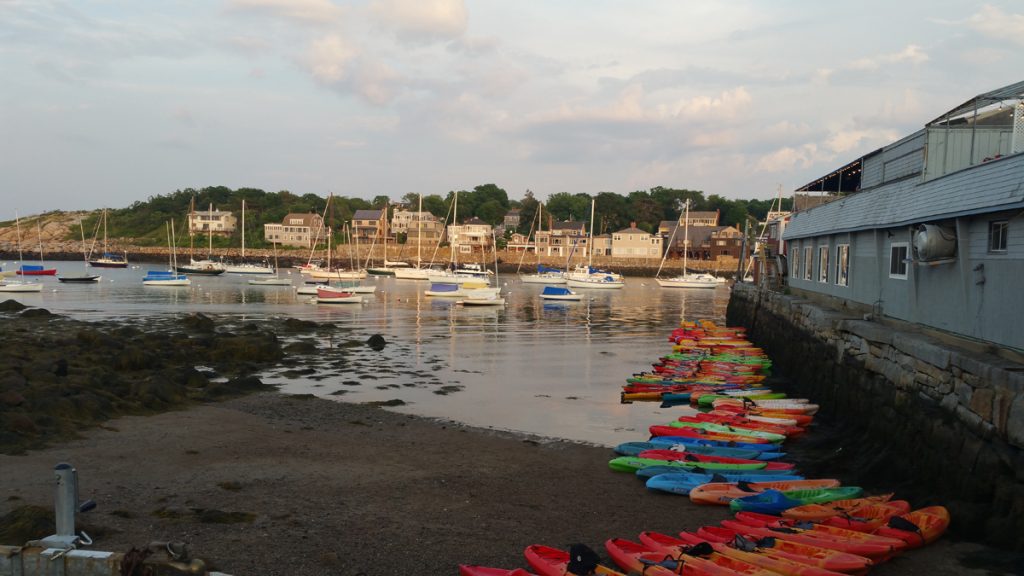 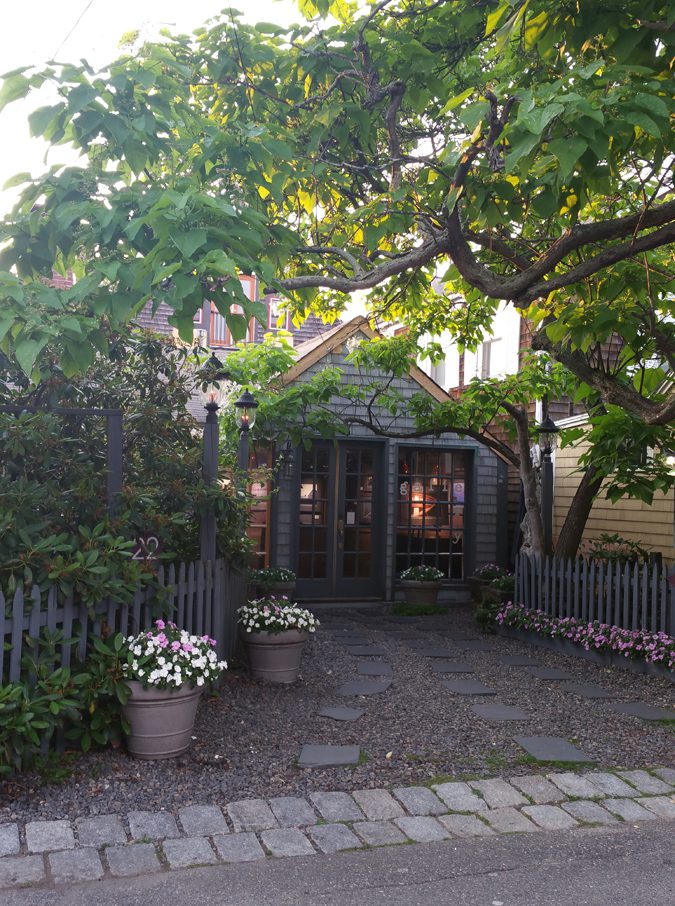 In conclusion, I would definitely recommend a stay at the Emerson Inn. If you find yourself unable to book a room in Salem and are interested in other options on the North Shore, you can find the Inn online at www.emersoninnbythesea.com.

Thanks so much for reading about my stay, I hope this information was helpful to you. Enjoy!! <3

Please note, I was compensated for my stay at the Emerson Inn in exchange for my review. However, my thoughts and opinions are always my own. No business can pay for a positive endorsement on my website or social media. I am always open and honest about my opinion and collaborations. You can read all about my disclaimers, privacy policy and more here.

Please note all images used are copyright Things to do in Salem and may not be used without permission. For usage or questions regarding this, please contact me at info@thingstodoinsalem.com.

If you’re a Salem based or North Shore based business and are interested in working with me, click here for information. My media kit can be found here and please feel free to email me with any questions at info@thingstodoinsalem.com.

The @salemcomedyspiritsfestival was kind enough to

Good morning everyone and happy Monday. Today on t

I am currently getting photography inquiries for e

Have you seen the latest blog post over on Thingst

Come with me to the ribbon cutting at @blackcrafts

@salemsblackhatsociety is on the loose! Be sure to