Salem has so much more going on than just witch trials and haunted happenings. I published a blog post a few weeks ago, Seven reasons why Salem, MA is more than just Halloween, and this post is sort of an extension of that! So here we go…ten fun facts about Salem, MA.

Parker Brothers was a game manufacturer that created many classics you’re probably familiar with. Monopoly, Sorry!, Risk, Ouija and Trivial Pursuit are all Parker Brothers creations. Their story began in Salem, MA and they were originally called The George S. Parker Company.

Did you know that several of the episodes of the TV show Bewitched were filmed in the city? The movie Hocus Pocus was also largely filmed in Salem as well as parts of Rob Zombie’s “The Lords of Salem”. There are certainly other TV shows and movies that have used areas of Salem but these ones are the most commonly searched.

Salem is the Hellenized form of the word for “peace” in Hebrew (שלום, shalom).

The statue near the Salem Witch Museum, across from the Salem Common is NOT a statue of witch. 😛 However, tourists and those not familiar with Salem’s history mistake the statue of Roger Conant for one often.

“Roger Conant (c. 1592 – November 19, 1679) arrived in Plymouth Colony from London early in 1623/24 with the profession of salter. Early in his colonial life, he became associated with those opposed to the Puritan authorities in Plymouth and led the settlement to outlying areas, particularly in the Salem area, which he is credited with founding. He was the first governor of English settlers in Salem from 1626 to 1628.” [Source]

Salem is the birth place of the National Guard

In 1637, the first muster was held on the Salem Common where for the first time, a regiment of militia drilled for the common defense of a multi-community area. This laid the foundation for what became the Army National Guard. In 2010, Deval Patrick signed an act designating Salem as the birthplace of the guard which was later approved in 2012 and signed into law by Barack Obama in 2013. [Source]

Salem is and always will be a popular travel destination. More than one million tourists visit Salem annually bringing in at least $100 million in spending each year. In 2016, over 250,000 people came to Salem over Halloween weekend! [Source]

That must have been a fancy chair!! “In 2011, a mahogany side chair with carving done by Samuel McIntire sold at auction for $662,500. The price set a world record for Federal furniture. Federal furniture refers to American furniture produced in the Federal Period, which lasted from approximately 1789 to 1823. Notable furniture makers who worked in the federal style included Duncan Phyfe and Charles-Honoré Lannuier. It was influenced by the Georgian and Adam styles, and was superseded by the American Empire style.” [Source] [Source]

Salem has a sister city

Did you know Ota, Japan is a sister city to Salem? The official sister-city relationship began in 1991 as an outgrowth of the century-old affiliation between Salem’s Peabody Essex Museum and the Ota Folk Museum. You can read more about this here.

The Peabody Essex Museum has been around for a long time

The PEM was founded in 1799, making it the oldest continuously operating museum in the United States. [Source]

The Witch House is the only structure still standing in Salem with direct ties to the Salem witch trials of 1692, thought to be built between 1620 and 1642. It was the home of Judge Jonathan Corwin.

What are your favorite Salem fun facts? Feel free to comment below. Enjoy!! <3 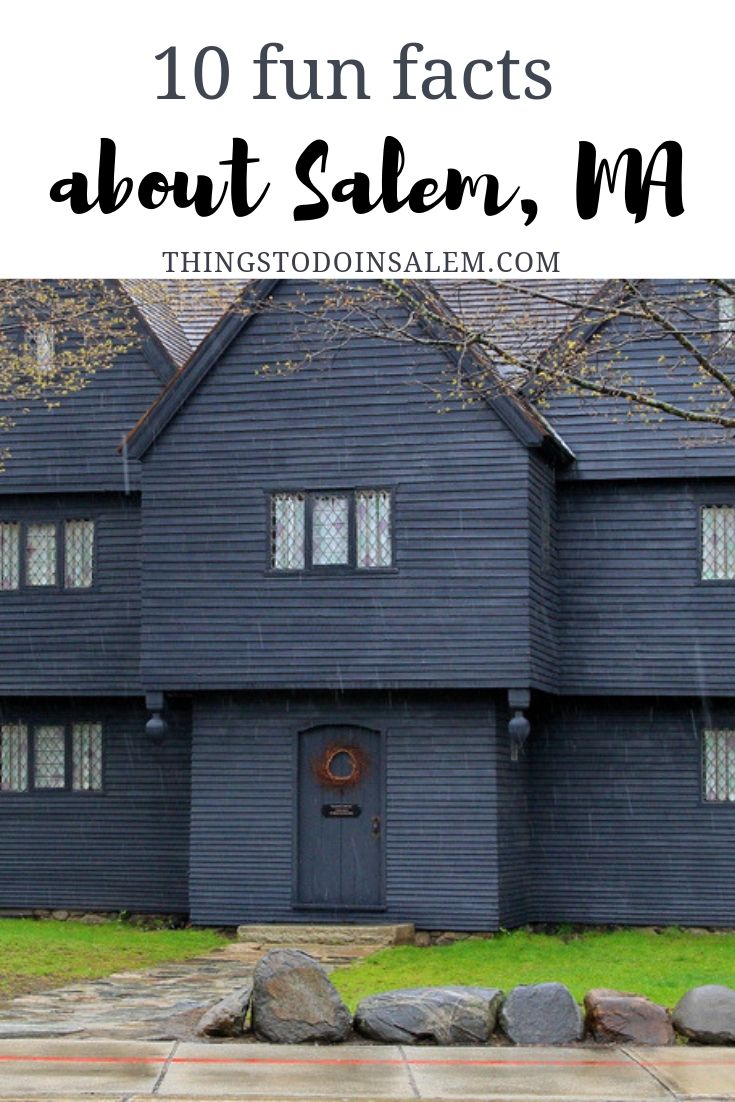